If you are a registered Apple iOS developer then you would be interested to have a look at recently released iOS 5 beta 5 build 9A5288d which is compatible with iPhone 4, iPhone 3GS, iPad 2, iPad 1, iPod Touch 4 and iPod Touch 3G. 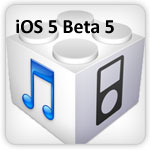 OTA, the feature announced for iOS 5 final release is tested out through beta releases of iOS 5 and iOS 5 beta 5 is also available at iOS Dev Center for direct download with file size of 787 MB and through over the air which weights around 128 MB size.

As a precautionary advice, iOS 5 beta OTA updates do not work for jailbroken iDevices so you should stay away from it otherwise your device will seriously get injured which will not get entertained with its warranty.

Xcode 4.2 Developer Preview 5, iTunes 10.5 beta 5 and Apple TV are also released to developers along iOS 5 beta 5 and available for download.