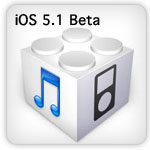 At the moment no details are provided through release notes that what changes iOS 5.1 beta includes. So download and test it and provide your feedback about it through comments.