New iPad, iPad 3 which was unleashed on March 7 press event, will get launched on Friday 16th March 2012 in the US and nine additional countries including Australia, Canada, France, Germany, Hong Kong, Japan, Singapore, Switzerland and the UK; along with Puerto Rico and the US Virgin Islands. 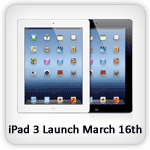 The third generation iPad will be available for walk-in customers on Apple Retail Store whereas iPad 3 will also be available at Best Buy, Radio Shack, Sam’s Club, Target and Walmart in the U.S.