Apple announced the third generation iPad, The New iPad on March 7 media event. In following you can check out the new iPad 3 prices, release and availability details. 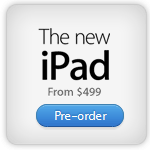