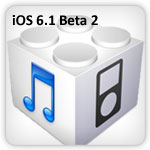 Registered developers can download iOS 6.1 beta 2 via link below to iOS Dev Center.