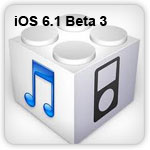 If you are running previous iOS 6.1 beta version on your iDevice then you can grab iOS beta 3 as over-the-air (OTA) update by navigating through “Settings” > “General” > “Software Update” > “Install Now” on your iDevice.