Apple released iOS 10.1 with some bug fixes and enhancements and you can see complete release notes at the bottom, this update is iOS 10.1 release not a beta update so you can update on you iPhone or iPad without worries. There are very minor chances of any bug or errors because this update is released after fixing some well known bugs in iOS 10 final release. 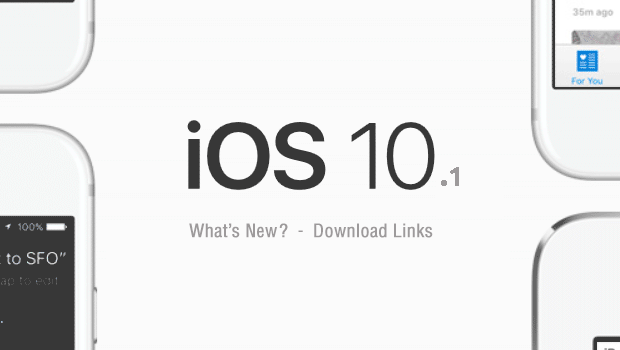 If you are interest to update you device to iOS 10.1 then first make sure you device is iOS 10 is compatible with your iPhone or iPad device. After confirming that your device can run iOS 10 then you can download and install iOS 10.1 OTA (over-the-air) from iOS Settings or using iTunes

Why IPSW? these firmware files of iOS 10.1 are required when you want a clean or fresh install of iOS on your iPhone, iPad or iPod touch devices. You need to download iOS 10.1 specified for your device model, a USB data cable, Latest iTunes version install on your Windows or Mac.

Other improvements and fixes

If you are looking for any specific iOS version then check out iOS section and download required iOS version for iPhone, iPad, or iPod Touch.

Next Post How to Install iOS 10.1 on iPhone, iPad or iPod Touch