iOS 11 is another major release of iOS from Apple with some new features, and every time due to new advanced features there are chances that old Apple devices can’t handle it. Apple may drop few old devices that will not be compatible with the current major iOS version. If you want to know about the compatibility of your iPhone, iPad or iPod Touch with iOS 11, then see the list of Apple devices given below that is capable of running iOS 11 on it.

iOS 11 developer beta is released and available to download right now. Apple will release iOS 11 public Beta later this month, but you have to register with Apple beta program, see this guide to know more about it. Final iOS 11 version will be available to everyone later fall 2017.

Apple iPhone, iPad or iPod Touch models that are already running iOS 10 and compatible with iOS 10 they don’t have to worry, and these models are capable of running iOS 11 as well. There are chances your device may able to run iOS 11 but not capable of running few features due to missing or lack of hardware. More details about these compatible devices are given below as well.

Bad news for iPhone 5 and 5C users, because these devices can’t run 64-bit apps and the iOS 11 is 64-bit only operating system. So, iPhone 5S and higher models are compatible with iOS 11. Below, the list of iPhone models that support iOS 11.

Apple iPad mini 2 and higher models that have 64-bit chip will be able to run iOS 11. Apple iPad Mini 2 was first to come with an A7 64-bit chip, and that’s why iPad mini 2 is compatible with 64-bit iOS 11 mobile operating system. Here is the list of iPad models that support iOS 11.

iPod touch 6th generation is compatible with iOS 10 and will be able to run iOS 11 without any problem. 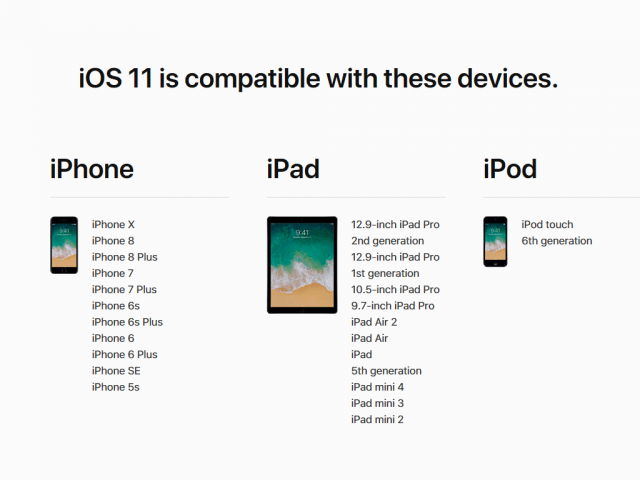 Now you know that which devices are compatible with iOS 11, and you can stay on older iOS, or you have to buy a new compatible device. If you have any question related to compatibility of devices with iOS 11 or any previous version, please post your question below in the comments box, and we’ll do our best to answer your question, Thanks.

Looking for iOS firmware file for iPhone, iPad or iPod? Check this link where you can download any latest or previous iOS version.