Dingleberry tool is released to jailbreak BlackBerry PlayBook which is in beta stage. It is an untethered jailbreak solution for PlayBook, allows users to run custom OS and unsigned apps, yet still it has some limitations which will be fixed hopefully in future its release. 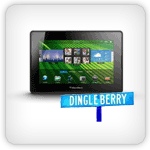 At the moment Dingleberry jailbreak tool for PlayBook is available for Windows expert users and Mac version will be out there soon.

In following we are writing guide for Windows users who want to jailbreak/root their PlayBook, so proceed at your own risk as process can brick your device.

Dingleberry asks for IP address and password, so provide that

Done! You have jailbroken PlayBook now and free to install unsigned apps and so on.