Here is a free promotion offer of Modern Combat 3 by Gameloft for Galaxy S II users, which could be grabbed through link below to Samsung Apps online store. 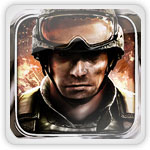 When war hits home, abandon all fear. The best, most realistic smartphone FPS series returns with even higher intensity and an apocalyptic battle for the freedom of the United States, for one or more players.

You can play Modern Combat 3 game on your Samsung Galaxy S II over Android Eclair 2.1+up.

Thanks for sharing this free game for Galaxy S II