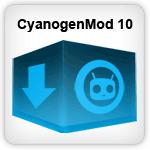 Folks who are not familiar, CyanogenMod is a customized Android firmware works for Android users who want to modify their stock Android smartphone.