The official date for Apple Worldwide Developers Conference WWDC 2013 is unveiled as the event will kick off on Monday, 10 June at Moscone West, San Francisco and will end up on 14 Friday, June 2013. 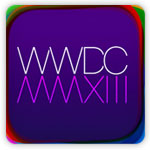 It is expected that with some other announcments Apple will provide preview of iOS 7 and Mac OS X 10.9 at their developer conference event WWDC 2013.

Next Post TinyUmbrella v6.13 Allows to Save iOS 6.1.3 SHSH Blobs