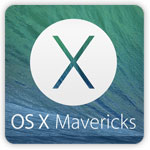 If you are an enrolled Apple developer then you can download Mac OS X 10.9 Mavericks Developer Preview 1 directly from Apple.