Samsung Galaxy Nexus is the first handset released with Android 4.0 Ice Cream Sandwich and now there is a good news for users who want to get root access to their Galaxy Nexus that its already been rooted. So, by following the guide below you can learn how you can root your Galaxy Nexus. 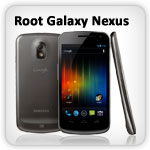 Warning: We are not responsible if your device gets any damage after following instructions below. It is also recommended to backup your mobile data before proceeding next.

Download Superboot zip file and extract it to a directory

To put your Galaxy Nexus into bootloader mode, first Turn it OFF and then Turn ON by keep pressing the Volume up and Volume down buttons until it shows the following screen

Linux: Open terminal to the directory containing the files which are extracted, and exectue

Now, if you have followed the above step correctly then your device should be rooted and ready for a free use.

Note: If you have a retail Galaxy Nexus, then first you must unlock the bootloader through command below