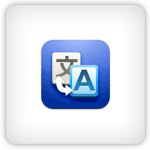 You can download Google Translate v1.3 free for iDevices over iOS 3.0 or later through link below.