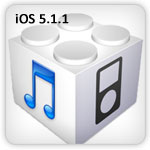 iOS 5.1.1 update weights 47.3 MB and available via direct iTunes download links below or as an over-the-air (OTA).

Next Post TinyUmbrella 5.10.15 with Minor Fixes for Windows and Mac