At iPhone special event, on 10 September Apple announced iPhone 5C on iOS 7, with the same specification which the iPhone 5 has but it comes in five different colours. In following you can check iPhone 5C price, and availability. 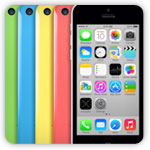 Official pre-order date for iPhone 5C is 13 September, and the device will be delivered on 20 September. Initially iPhone 5C will be launched in 9 countries including the US, Canada, United Kingdom, France, Germany, Australia, Japan, China and Singapore. By the end of December 2013, iPhone 5C launch will be expended to 100 more countries.