OS X 10.10 System Requirements are very similar to OS X Mavericks, but we have to see until we got final version of OS X this fall.According to Wikipedia the following Mac models are compatible with OS X Yosemite 10.10:

If you don’t know exactly which iMac, Macbook, Mini or Mac pro model do you have then here is the method to find Mac model.

Click on Apple menu and select “About this Mac” option, this will open a screen with some basic Mac software and hardware information. But If you want to see the Mac model name then you need to click the “More info…” button on the screen, and here you will find the Mac Model information and some extra hardware related specs as well. 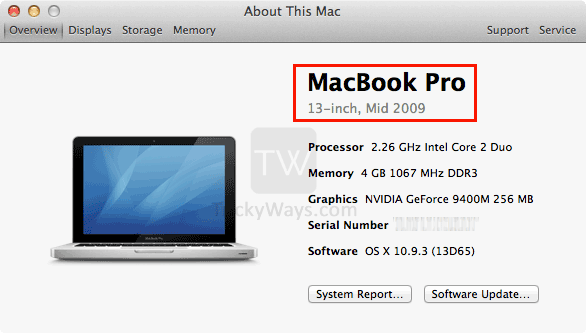 If you have installed any earlier version of OS X on your Mac like version 10.5.6 then you might see a different screen when you click the “More Info…” button. But you can find Mac model and other hardware and software information on that screen as well.

Previous Post How to Get OS X Yosemite 10.10 Beta Free