As we all are well aware that Pangu is a jailbreaking tool used to jailbreak iOS 7.1 and above. Pangu supports all the devices running iOS 7 and above. Pangu was suspected to be fake at first as may fake jailbreak tools surfaced ground. The tool was created by team of Chinese hackers. The jailbreak came out of nowhere and suddenly without any rumors and stuff that was why it was suspected to be fake at first. But at the end of day it was legit and not fake. It was indeed a sign of relief for all those waiting for 7.1 and above since long.

Some users were having trouble jailbreaking their devices and some had to suffer after effects. The problems were related to boot loop, jailbreak fail notification and some others. As a result Pangu jailbreak tool is updated to version 1.2 with most of the bug fixes and is available to download for Mac and Windows. The new version includes various bug fixes and some improvements. The updates in tools help to create more stable jailbreaks and enhance user experience. 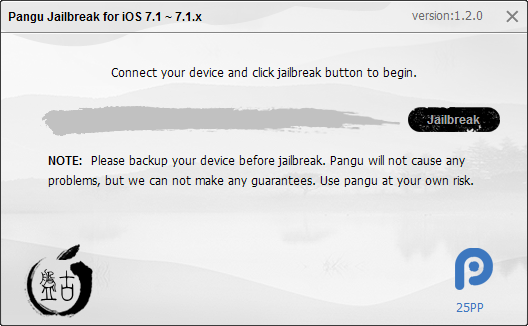 Version 1.2 supports the same baseband as the previous one, and can be used to jailbreak iOS 7.1 to 7.1.2.Dreaded boot loop issue iPhone 4/4S has been fixed along with other minor bugs iPhone 4/4S users were facing.

Well if you already have jailbroken using previous version of Pangu and don’t face any issue you don’t need to re-jailbreak your device. All you need to do is just install Saurik’s AFC2 package if you need full file system access. The Pangu team will shortly release Cydia package with bug fixes for those who have already jailbroken their devices using Pangu.The jailbreaking process is same as previous for those who have no idea how to jailbreak using Pangu follow our How To Jailbreak Using Pangu Guide.

Undoubtedly Pangu Team surprised everyone by throwing iOS 7.1 and above jailbreak. At first they used exploit discovered by iOS hacker i0nic,and then in version 1.1 they used different exploits even after iOS 8 was announced which was said to be a big blunder by iOS hacker community. The team promises to provide with future jailbreaks. Which team wins the race for jailbreaking iOS 8 time will reveal. If you are one of those facing issues in jailbreaking your device you must get downloading latest Pangu and jailbreak your device using Latest Tool. Download links both for mac and windows are below

Next Post How to Always Run Command Prompt with Admin Privilege