Samsung came up with something huge at IFA Trade show in Berlin. “IFA is the world’s leading trade show for consumer electronics and home appliances. It takes place from September 05 to 10, 2014 in Berlin”. Tech Giant Samsung has announced something new, something that was expected and predicted before, what is it? Find out below.

Starting with the design, it’s not much different from the previous Galaxy Note 3.But still it is bit different having metallic finish around the corners it looks more like recently announced Galaxy Alpha. Galaxy Note 4 offers removable battery and expandable memory. Removable back cover is same textured plastic. The Galaxy Note 4 will be available in four different colors Black, White, Gold and Pink. Which gives a wide variety of choice according to your style and taste. The device is lightweight and weighs about 176 grams. While other dimensions are 153.5mm x 78.6mm x 8.5mm. 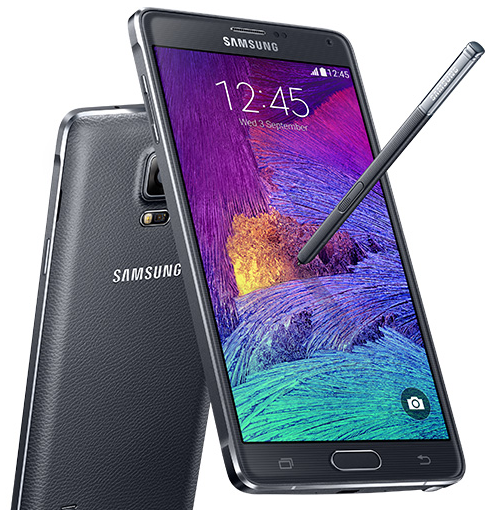 Talking about the display the Galaxy note 4 has the 5.7 inch panel as in the previous Galaxy Note 3.The Galaxy Note 4 possesses Quad HD super AMOLED Display has a resolution of 2560 x 1440,you won’t be able to notice a single pixel anyway. The Display is protected with an improved Glass which is said to be tougher than previous Galaxy Note 3.The S Pen is something new, According to Samsung it feels more like a real pen. So if you are attracted to Note series for its Pen than it’s a real treat for you.

Coming towards the hardware, Depending on country and carrier two models will be available a 2.7 GHz Quad core processor and a 1.9 GHz Octa-core chip, But both of the models will have 3 gigs of ram. Galaxy Note 4 is packed with category 6 LTE, Wi-Fi 802.11 a/b/g/n/ac a usual Bluetooth 4.1, NFC and Infrared. Other sensors include accelerometer, proximity, barometer, finger scanner, UV, and heart-rate sensor. Galaxy Note for has a built in memory of 32 GB and is expandable by a memory card slot. The device is packed with 16MP rear camera with smart optical image stabilization and a front facing 3.7 MP is amazing.

The Galaxy Note 4 has an amazing battery of 3220 mAh, and according to Samsung the device will roll out with Android KitKat 4.4.The Galaxy Note 4 will be out in October and the price tag has not been given yet. It not very long when we will have hands on experience with the new Galaxy Note 4.

Previous Post How to Backup Windows 8.1 with Built-in Tool