Apple released update for Mac OS X 10.7.1 Lion client and server. Update is recommended by the Apple for all users running OS X Lion. This OS X Lion update included some general fixes to enhance the stability and compatibility of Mac. There are different update files are available to download for Mac Mini and Macbook Air. 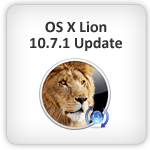