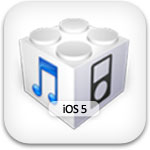 In July, 2011 at WWDC event Apple released iOS 5 beta 1 to developers and announced that the final version of product will have 200+ new features.

After releasing 7th beta version of the iOS 5 to developers, iOS 5 Gold Master was pushed on 4th October at Apple’s press event where iPhone 4S was unveiled.

So, have a look at following links to grab iOS 5 for your device.