The official ThOR: Son Of Asgard Game for iPhone, iPod touch and iPad is available as a free download for a limited time, whereas normally this game cost $2.99. 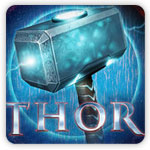 “Play as the Mighty Thor and defend Odin’s Kingdom of Asgard from her enemies!

Son of Asgard features stunning HD graphics optimized for Retina Displays that bring Asgard and Thor to life. Step into the role of Thor in this epic 3D action game. Asgard is under siege from forces both inside and outside its walls. Wield the great hammer Mjolnir as you battle rampaging foes to protect the kingdom and the nine worlds.”

Hey guys thanks for these free iOS games updates.

Get hurry to download free THOR: Son Of Asgard for iphone and ipad.