Google has released YouTube Capture app for iPhone and iPad Touch that let you allow to film videos and upload to YouTube in few clicks. YouTube Capture for iOS is free and live at App Store for download. 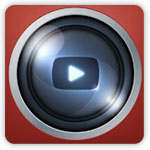