Twitter v5.5 for iOS is released with some new features, especially it enables users to launch applications via tweets which is possible if developers of those apps integrate Twitter Cards to their created applications. 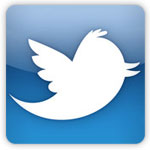