As we all are anxiously waiting for iOS 8, we totally forgot about iOS 7, that it still exist for our i-devices and we must not forget that there still is an update for iOS 7.1, in the form of iOS 7.1.2. At first, Apple released iOS 7.1.1, a small bug fix to fight bugs found inside of iOS 7.1. The update, at little, but did deal with several iOS 7 issues. However, as we’ve reported, iOS 7.1.1 also brought along some iOS 7.1.1 problems that still affect users.

MacRumors had reported that “carriers are currently in the phase of testing the said update, and it will be pushed to end users in the coming week.”

It turns out that rumor was true and Apple has released the newer version of the ios 7.1 today as it was expected to be available for public in July for those who have supported devices can go ahead and download the latest version ios 7.1.2 for their device.

Here we have some information regarding the recent update, the update comes with some important bug fixes including the one regarding the ‘Mail attachment’ which was considered a serious risk. So iOS 7.1.2 iBeacon connectivity and stability improved, fix Bar-code scanners and data transfer bug with third-party accessories, issue related to data protection class of Mail attachment fixed as well. 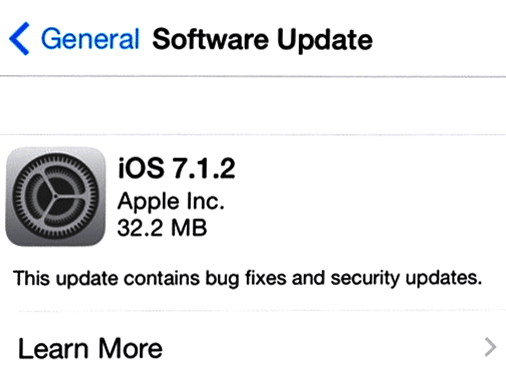 If you want to download update for iPhone, iPad or iPod touch, you can do so via the OTA (Over The Air) update from Settings > General > Software Update. OTA is around 30 MB, while the complete download via iTunes is around 1.4GB. Here is guide to update iOS 7.1.2.

iOS 7.1.2 is jailbreak safe and can be jailbroken using Pnagu. We have a guide for you on how to jailbreak ios 7.1.2 using Pangu.

Next Post How to Jailbreak iOS 7.1.2 iPhone, iPad and iPod Touch Using Pangu