Do you have iPhone Battery problem? or the same problem on iPad or iPod touch, battery drain is one of the worst issue iOS users have to face, poor Battery or software issues drain’s battery so fast that a user has to face out of battery situation sooner or later. Battery is a major concern every smart phone user has in mind.

iOS 7.1 Decreases Battery Life: Has It Affected You??? When iOS 7 was released, many people, especially those who had older devices, experienced a major decrease in speed. Many people complained saying it was Apple’s plan to make older iOS devices obsolete.Well to change that Apple released iOS 7.1. But with it comes a new problem; battery drain.

Every iOS update comes with some bug fixes and enhancements but, If you update to iOS 7.1.1 and still facing the battery issue we here have a short test for you which would let you know if you have a battery problem with your i-device. The test for checking the iPhone, iPad and iPod touch battery problem is very simple. You Just have to follow the steps below. 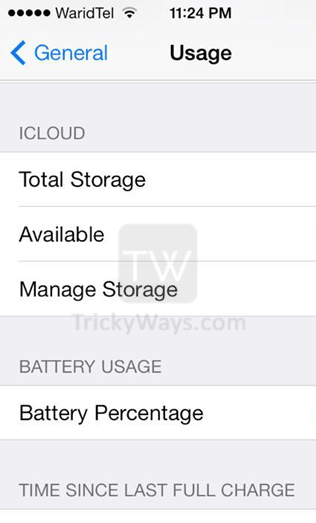 Note down the “stand by time” and “usage time”. Press the sleep/wake button to put the device to sleep. Don’t turn it off! Place your iPhone, iPad or iPod touch down for exact five minutes.

Press the sleep/wake button, to get the device back up. Go to Settings > General > Usage and check the usage and stand by time.

This simple test allows you to check if you are facing a battery problem on your iPhone, iPad or iPod touch. You should check these guides to increase iPhone battery life or Fix iOS 7.1 battery problem.