iOS 8.2 is available to install on all iOS 8 compatible device iPhone, iPad, iPod Touch. You can update your device right now either OTA (over the air) method or installing iOS 8.2 using IPSW file in iTunes. iOS 8.2 IPSW direct download links are available at the bottom, just make sure you choose the right link to download firmware for your device.

According to Apple in this iOS 8.2 update introduces support for Apple watch so those who wants to use Apple watch on April 24th must have installed iOS 8.2 on their devices. They also improved the Health app, fixed some bugs and increased the stability. You can find complete iOS 8.2 release note at the end.

Before installing iOS 8.2 update on your device, please backup your device first. After that update your device to iOS 8.2 over the air, make sure you have good internet connection.

Go to your device Settings, select General and then choose Software Update option and then download and install the updates. 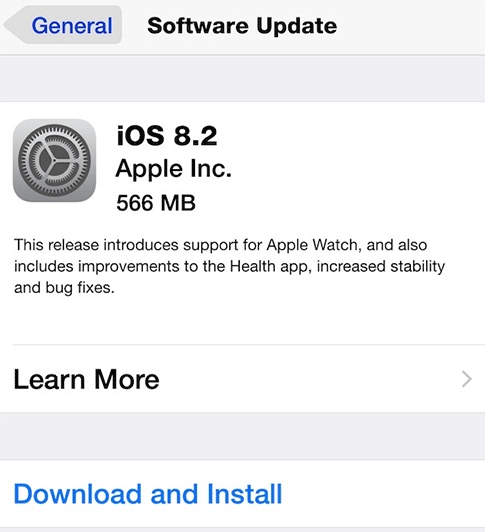 Remember there is no jailbreak available right now. So, if you do care about your exiting iOS jailbreak on the device don’t update your device. Currently TaiG, Pangu jailbreaks available for iOS 8.1.2 not for iOS 8.1.3 or 8.2 releases.

This release introduces support for Apple Watch, and also includes improvements to the Health app, increased stability and bug fixes.

Previous Post How to Type Apple Logo Symbol in Windows

Next Post How to Check Windows Installation Date from Command Prompt