After so many months, So much discussion this is the time all the iOS users had been waiting for. After some iOS 8 Beta releases now Apple has finally released iOS 8 final version for iPhone, iPad and iPod Touch. And if you are one of those with compatible devices you can get iOS 8 right now on your iDevice and start enjoying latest features of Apple’s latest mobile OS. Below are the list of the devices which are compatible with iOS 8.

iOS 8 is packed with exciting new features like custom widgets, Enhanced Messaging and a new notification center is added. For those of you who don’t know how to update to the latest OS you can find out in instructions below. Follow the following steps and you can get Apple’s latest mobile operating system iOS 8 on your device.

You can update to iOS 8 using OTA updates or through iTunes. But make sure that you backup your device before attempting update in case something goes wrong you won’t lose your important data. However it rarely happens.

OTA (over the air) OTA update is very simple and easiest way of updating your iPhone, iPad or iPod Touch. Using OTA you don’t need anything except an good internet connection. You can simply download iOS 8 directly on your iPhone, iPad and iPod touch. All you need to do is go to device Settings > General > Software update options, and there iOS 8 will appear simply tap on “Download and install” button and let your device download and install the latest iOS. 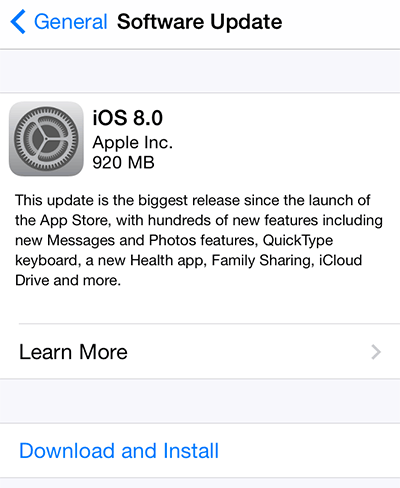 iOS 8 can be downloaded using iTunes, for this you need to have iTunes 11.4 as it is the compatible version of iTunes with iOS 8. Download iOS 8 using iTunes, Connect your iDevice and a message will prompt “New version is available” just click download and install. And that’s all, both the process are pretty simple and hassle free.

So what are you waiting for folks? Get downloading and start enjoying latest new features and start exploring?