Today apple released total 4 betas of their products. iOS 9.3.3 beta 2 with build number 13G21, tvOS 9.2.2 beta build 13Y816, OS X EI Capitan 10.11.6 beta 2 build 15G12a and the first release of watchOS 2.2.2 beta build 13V601 to developers for downloading and testing. These beta releases are not available to the public yet so, to download any of this update you must have Apple developer account or check how to join Apple Beta program to get earlier public beta.

This new build of iOS contains some performance improvements and bug fixes. Developer can download this beta of iOS 9.3.3 from here. 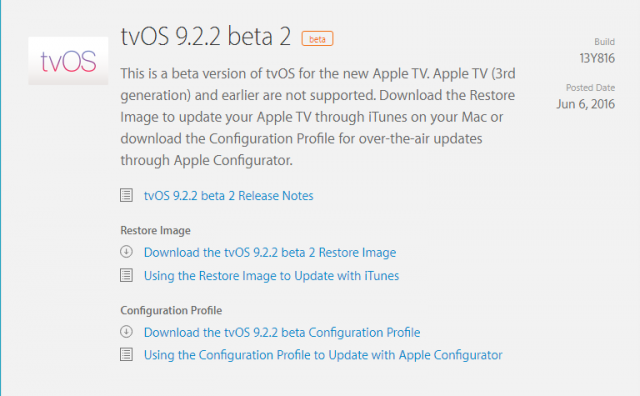 Apple also released second beta of tvOS 9.2.2 to developers. tvOS 9.2.2 beta 2 version is for new Apple TV, 3rd Generation of Apple TC and earlier are not supported with this build. Download the restore image of tvOS 9.2.2 beta to update your Apple TV through iTunes or download Configuration profile to update for over-the-air through Apple configurator.

This is the pre-release version of OS X v10.11.6 beta 2 to developers for testing with build number 15G12a. The OS X El Capitan 10.11.6 update improves the stability, compatibility, and security of your Mac. You will not be able to revert back to your old system after updating to this beta. Requires a restart to complete installation.

Apple released the first beta of watchOS 2.2.2 with the build number 13V601 to public tester for testing. Use your iPhone to update your Apple watch software but iPhone must be running iOS 9.