When your Windows having functionality issues, it may display an orange screen of death, “Your PC ran into a problem and needs to restart…” It’s not common as compare to the blue screen of death or black screen of death but it occurs. If you are one of them who suffer this kind of issue then you are in the right place. This issue appears commonly by hardware failure, might be display or GPU. If you face this issue then your troubleshooting methods are right below. 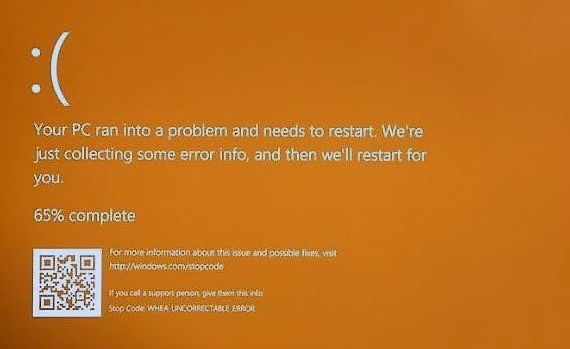 Some users describe this error:

I just encountered a problem with my computer running on Windows 10. While starting an online game of Battlefield 4, the computer abruptly (of course it is abruptly when you get a Windows Screen of Death) showed an Orange screen of death, which to me felt unusual, since I am used to seeing a blue screen of death.

My desktop computer suddenly will not get past the orange startup screen. I was able to use remote desktop to access the system and everything was working normally. I tried restoring, which did not help. I then reset the computer (re-loaded Windows) which ended in the same result except now I can no longer use Remote Desktop to access the system at all. But I’ve got all the white dots I’ll ever need.

Try the given methods below one after other and hope this will solve the problem.

First thing you should try is to restart your computer by the press and holding the power button while the orange screen appears. Press the button until your computer restart. Now check the problem is resolved or not.

If you have installed apps like Duet Display, soft SD, these apps can cause the system crash problem, which will show the orange screen of death.

If you set your Windows settings to overclock for better performance or you are just the gaming lover. Reset the overclocking setting to the default and remove all the tools which help to overclock CPU/GPU.

Sometimes you need to update the drivers of your graphics card which are now not compatible with Windows after updating or installing any other app which is not compatible with the current version of your system drivers. To automatically update and compatible your Windows drivers follow the instruction below

This way you have to update your devices drivers one by one. If you don’t want to install manually one by one then follow the next below steps to download and install all the drivers and necessary updates to your computer.

To install the latest drivers you can also use Windows update feature which is very handy for those who don’t know which driver they need to download.

That’s it, Windows will first analyze your computer and then search and download all the updates including drivers updates, Windows updates, security patches, etc. this will takes the time you don’t have to worry about anything.