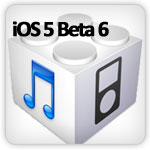 In July Apple unveiled iOS 5 beta 1 to developers at WWDC 2011, with more than 200 new features and also announced the final iOS 5 launch to general public in fall 2011 with the release of new iPhone.