Apple has released iOS 4.4.4 (9A406a) for Apple TV 2G that includes some bug fixes and improvements. Now, folks at FireCore Dev-Team has also updated their jailbreak tool Seas0nPass for iOS 4.4.4 which is available for Windows and Mac users. 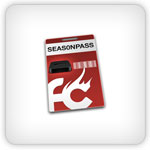 Next Post How to Jailbreak Apple TV 4.4.4 with Seas0nPass