Guide below will help you to know the process to perform untethered jailbreak of iPad Mini, iPad 4, and iPad 3 over iOS 6.1 with Evasi0n tool, so continue reading after the break. 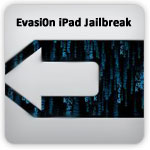 Warning: Create a backup of your iPad before proceeding with Evasi0n jailbreak tool. Do not open iTunes or Xcode on your computer until Evasi0n complets iOS jailbreak process.

Run Evasi0n and connect your iPad to computer via USB cable, immediately Evasi0n will detect your attached iDevice

Click on “Jailbreak” button on Evasi0n screen, in result Evasi0n will initiate jailbreaking process, and after doing several steps it will reboot your iPad

Evasi0n will ask to unlock your iPad and when you have done, you will find an icon with the name “Jailbreak” on your iPad’s home screen, so tap on that icon once and your iPad’s screen will be black and after come back to home screen

Evasi0n will continue some other jailbreak process steps, on completion of those “Done!” message will appear on screen and your iPad will reboot, which may take few minutes so be patient

Evasi0n logo will display on your iPad screen, with many of other messages screens and at the end your iPad lock screen will display, so just unlock it and there you will find Cydia icon on your iPad’s springboard

This is all, Your iPad is running over jailbroken iOS 6.1. So, just try Evasi0n to do untethered iOS 6/6.1 jailbreak on iPad Mini, iPad 4, and iPad 3 and write us in comments about your experience.

Previous Post How to Jailbreak iPod Touch 5G, 4G over iOS 6.1 with Evasi0n