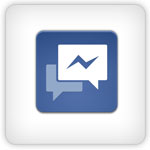 Description
Facebook Messenger is a faster way to send mobile messages to friends. With Messenger, you can send and receive messages with any of your friends around the world or anyone in your mobile contacts list. Messenger is available on iPhone, Android, and BlackBerry.