Apple iPod Touch does not have silent/mute button and if user want to put their music iDevice into silent they have to press volume down button continuously, until it reaches to silent. But jailbreak community comes with a Cydia tweak “TapVolumeToMute” for iPod Touch, which adds silent/mute function to your iDevice and it works just with a single tap. 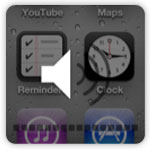 Download and install TapVolumeToMute from the BigBoss repository on your iPod Touch, Respring your iPod Touch and test it just by playing any media file and then press any of volume button and tap on-screen option to make your device silent/mute and that’s it.

Next Post How to Take Screenshot on Nexus 7 Tablet