The iOS 7 users know that Apple includes a new feature of automatic apps updates in new iOS, which makes the download and installation of apps updates swift and on time, without asking the user either they need updates or not. But if you are a person who want to have control on your iOS 7 equipped device then here you find guide that let you give opportunity to learn that how its possible to disable automatic apps updates in iOS 7.

If you prefer to update apps on your iOS 7 device by using the old fashioned way, of visiting the App Store and do not want apps auto-update then follow steps below on your iOS 7+ device to stop automatic apps updates.

Tap on “Settings” app from Springboard, and then tap on “iTunes & App Store”

Under “AUTOMATIC DOWNLOADS” section, toggle the ON/OFF slider to OFF white state from the ON green state followed by “Updates”, and thats it 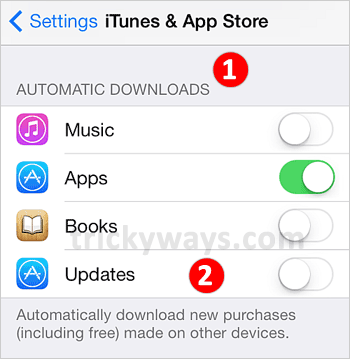 Now, you have to visit App Store in case you want to update applications on your iOS 7 device. But if you change your mind and want to enable automatic apps updates then follow the same guide, and simply switch ON Updates slider.

There are also some advantages to restrict automatic updates on iOS 7 device. As you will observe that after disabling automatic apps update, your device is running faster on iOS 7+.

Most notably, there would be an increased battery life especially for old devices running over iOS 7, if you turn off automatic app updates. Maybe, thats why Apple adds ability to disable auto-update for apps in iOS 7, to give control to user as they can utilize the feature according to their requirements.

The iOS 7 users also have observed that a blue dot randomly appears with an app icon on iOS 7 home screen, and for some users its also annoying to have blue dot with apps icons.Although, that dot indicates this app is newly installed or updated but when you will disable automatic apps updates, the blue dot will not appear randomly, but only incase when you will manually update the apps via App Store.

Previous Post How to Disable Blur Effects in iOS 7