Apple iOS 7 includes 200+ new features, and one of those is the blurry background that appears in apps like Notification Center, Spotlight, Messages and so on. A lot of iOS 7 users do not like blur effects for applications, and want the solid iOS effect back, so if you are one of those and looking for a way to disable blur effects throughout in iOS 7 then follow the steps below to do that easily.

In iOS 7.0.3 update Apple includes option to disable blur effects under accessibility options to help people to get rid of this feature, if they feel it irritating just through a single flick.

How to Disable Blur Effects in iOS 7

On Accessibility screen select “Increase Contrast” option and then tap on its ON/OFF slider to switch this feature ON. Once you turn ON Increase Contrast in iOS 7.0.3, in result it will improve contrast and remove transparent effects from the background of applications. 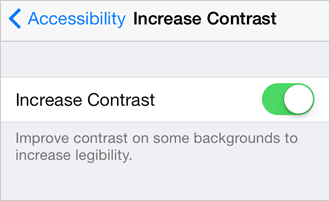 You can notice the change of background in Notification Center, Spotlight, Control Center, Messages etc on iOS 7, after enabling Increase Contrast. One more thing you notice that Increase Contrast turn on have an impact over readability on iOS 7, as it kills blur effect.

According to some reliable sources if you turn off blur effects on iOS 7 running over old Apple devices, will increase the iOS 7 performance and also has a good impact on battery life of those devices over latest iOS.

Now, just use this tip to remove blur effect/transparent effect in iOS 7 device and share your experiences with us that how it works? And also have a look either there is any impact on readability without blur effect on iOS 7 or not.

Previous Post How to Install Windows 8.1 Update from Store

Next Post How to Disable Automatic App Updates in iOS 7