Several times you have observed that some articles or text documents divided into columns on the same page which looks nice, and if you want to apply the same settings on your Microsoft Word 2007 or Word 2010 document then how you can do that?
So, here is the method to create columns in Word 2007 / 2010 document. Just continue reading below to know the complete process to create columns in Word.

Just type your text in that file whatever you want. Now there are two options either you want to apply columns to whole document or to a specific portion of document. 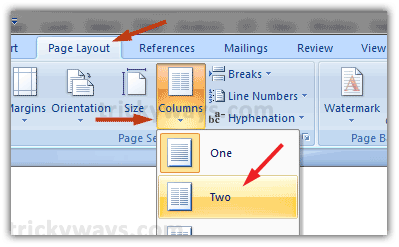 Select the text of one page or specific portion that you want to convert to columns and click on  “Page Layout” tab > “Columns” and select the number of columns as show below in screen shot. 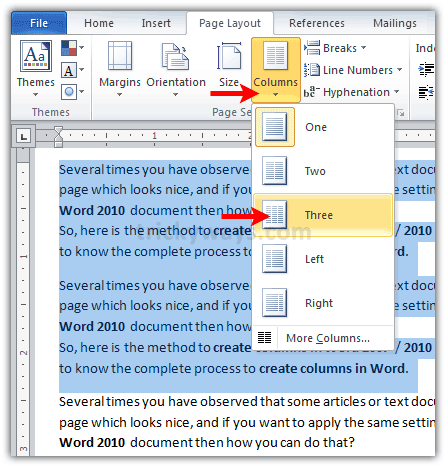 See also:
how to adjust width, Spacing and put line between columns in Word

is that too easy to create columns in word 2007, thanks for sharing these word 2007 tips

I was wondering about this columns feature in Word, its really nice.

Is there any limit to create columns in word 2007

Greetings,
I would like to ask you a favor.
How I could create a 3-column PAGES that each column continue indepedently to the next page (not the 2nd column of the same page ?
I wouls like to work on an article with 3 different languages which run in paralel on each page.
Thanks for your help.
Van

I have created a landscape doc with 2 columns which worked beautifully. However, there is a blank page 2 portrait that I cannot delete. How do I delete this 2nd page

To justify right and left margins in the same paragraph, create a table with only two cells; justify the first cell with the left justify and the right cell with the right justify; pretty simple to do but can be problematic with columns. Use table with two cells and type away!

How can I make my existing columns straight?

Word user since word came out. Help function is difficult to use. I wanted to set up two columns in my doc and searched for the old tab, or old menu. Couldn’t find for five minutes. This new word is more difficult to use.

good but u should put a little more in it

Next Post How to Adjust Width, Spacing and Line between Columns in Word