In previous versions of Windows, when you press print screen (prtsc) button from the keyboard, it saves the screenshot to windows clipboard, and you need to paste it in an image editing tool to save it. If you want to take multiple screenshots, then this might be the problem because you need to save the captured screenshot first and then take next one because Windows clipboard holds only one screenshot. In Windows 8 Microsoft added a new shortcut to capture screenshots and save to a folder in Pictures automatically without using any software or utility.

Capture Screenshot in Windows and Save Automatically

To capture and save screenshot automatically as a file in Windows 8, 10, or later versions. You need to open the required window/screen that you want to capture and then press Windows+prtsc key from the keyboard. You will notice a fade effect that shows you take a screenshot. Once you do this, a screen shot is captured and saved in a folder under Picture > Screenshots.

Open Windows Explorer, on the left side, expand This PC and then click on Pictures. Here you will find a Screenshots folder, open it and all the screenshots that you just captured will be available here. 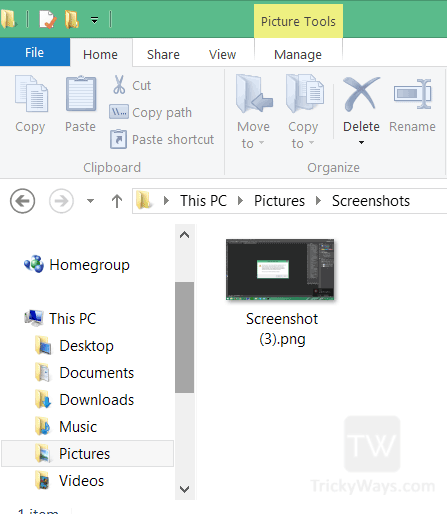 See also: How to change default screenshot folder place to another location on hard drive.

This Windows+PrtSc shortcut can only save the whole screen, and you can’t use the Alt key combination to capture and save on the Active screen. I think Microsoft should add that 🙂

Next Post How to Save Data Usage on Android