Are you one who is looking for iOS 13 Compatible Devices? You are at the right place where I have added the confirmed list of devices that are getting this new update. 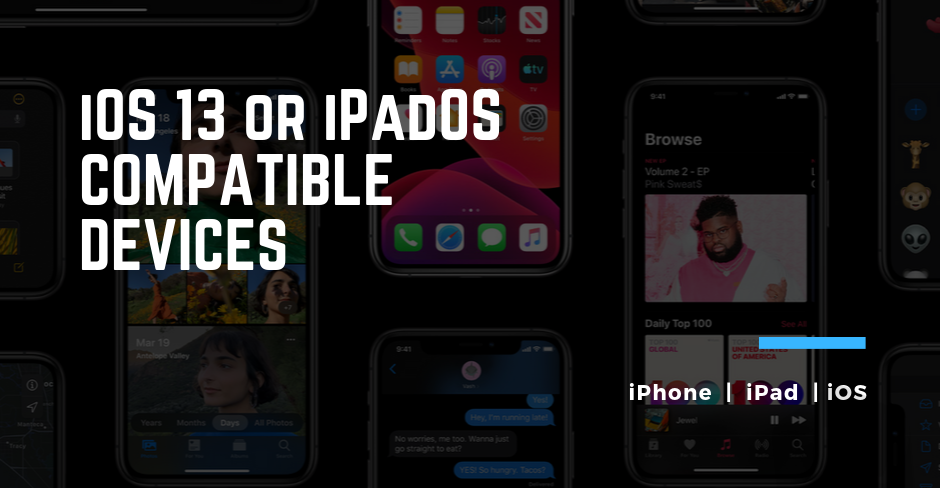 On the iPhone, it has a new Dark Mode, Built-in better video, and photo editor. Also, some new Animoji like lion, octopus, and others are coming. On the other side, the iPad has a new sleek look. iPad Pro family is going to be lit with the widgets and apps on one screen.

Everyone is searching for iOS 13 updates. One of the most frequently asked questions is: is my iPhone or iPad compatible with iOS 13? So do not worry. Here is a list of all iOS 13 compatible devices. All the given below devices will have iOS 13 updates.

Before proceeding next, I would like to share the method to install iOS 13 without a computer. Also, you can read iOS 13 Features in details. However, to the point here is a list of all iPhone, iPad or iPod touch which will get iOS 13 updates.

The iPad family includes all the Pro models. Some old iPad is not getting the update. Here is a quick look at the iPad devices list which is getting iPadOS Update.

Summing up the article, iPod touch 7th generation is also getting iOS 13 updates.

iPhone devices that are not compatible with iOS 13 are iPhone 6 Plus, iPhone 6, iPhone 5s, iPad Air 2013, iPad Mini 2, and iPad Mini 3 or older devices are not getting the iOS 13 update.

We feel sorry for those whose device is not mentioned here. You can buy a new iPhone, iPad, or iPod Touch from Amazon. Also, you can trade your old iPhone to get a new one at Apple Store.

Previous Post iOS 13 Features: All you Need to Know